Can men do laundry?

Well can men do laundry? Indesit, Britain’s most popular washing machine manufacturer, conducted a large scale survey to find out. They discovered that at least 58% of British men are unable to use a washing machine properly. All agreed that washing machines are “too confusing”.

This is from the gender that mostly runs the government and usually drives our lorries, trains and aeroplanes for us.

Unsurprisingly, 16-24 year old males are the least likely to do their own (let alone anyone else’s) laundry. Their most popular excuse is that they “don’t know which button to press”.

This is from the generation that spends 14 hours a day on their mobile phone and Playstation 4.

However there might be some truth in it, because 25% admitted that they don’t even know how to switch it on. A similar figure, 24%, also claimed that “women are better at doing laundry”.

Since modern laundry is usually done by a machine we wonder how many of them would agree with the statement that “women are better at operating machinery”. In fact if that’s true too then what are men for?

Can men do laundry if we make it really really easy?

Several washing machine manufacturers have begun to design washing machine models for people who “can’t” use washing machines. “One Touch” machines use a wash program that is fairly safe for most different colours and fabrics and can be started with “one touch”. No need to worry about any of the other settings.

Of course, it still helps if you have a little bit of understanding of fabric care. One Touch won’t stop those new jeans turning your white shirts blue. Perhaps they’ll just have to learn that the hard way.

Their Mum will probably bleach their shirts back white for them anyway.

But remember fella’s – you can always do it the old fashioned way, just take ‘em down to the river bank and hit ‘em with a rock 🙂 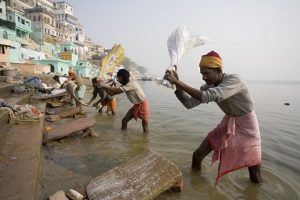 So can men do laundry? Let us know what you think by leaving a comment.

(c) Homesource 4U Ltd 2018 : no reproduction without permission.

We are currently running low on freezers, please call before ordering on 0115 8372373. Dismiss