Fridge disposal, has the government got it wrong?

More fridges and freezers than ever before are being abandoned, dumped or illegally consigned to landfill. Refrigerators contain gases that cause global warming, but legislation to ensure safe fridge disposal has failed. Where did the Government go wrong? 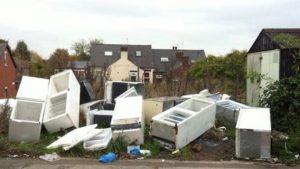 Dumped fridges on a Sheffield Street

Waste sites now charge from £15-£30 to accept a refrigerator or freezer. If you’ve had to hire a man with a van to take one to a waste site your total costs can easily be £50+VAT – assuming you succeed in getting rid at all, many waste sites simply turn them away. Government promises to invest in special recycling plants were too meagre, and the incentives to use them have failed to spread down the waste collection chain to waste site managers.

As well as illegal dumping, a black market in fridge and freezer breaking has developed – consigning smashed appliances to landfills without proper removal of oil, refrigerant gas and other potentially toxic components.

Appliances left on waste land or outside homes are often visited by “totters” who take the copper compressor off – releasing the last of the gas. Without the compressor, the waste site has even less incentive to take the chassis.

To avoid a growing mountain of abandoned appliances the government needs to correct four serious mistakes in its thinking.

Charges for refrigerator disposal are being justified with the claim that they stop refrigerant gases escaping. This assumes that scrapped fridges still contain gas. Most don’t. The leading reason people dispose of a fridge/freezer is because the gas has already escaped, so the legislation just bolts the stable door after the horse has fled.

From the moment those environmentally damaging gases were manufactured it was only a matter of time until they were in the air.

As well as the main tank of refrigerant, some “greenhouse gas” potential is also manufactured into the insulation, but this often ends up in landfill anyway – even when legally collected by an approved waste facility. The only thing the charges do is increase the obstacles to proper disposal.

Originally the intention was to make refrigerator manufacturers responsible for the return and disposal of their old appliances. A just and practical idea. But as usual the lobbyists got busy, and when the law was eventually passed it allowed them to make “donations” into a fund that helps support recycling companies instead.

So instead of being responsible for overseeing a complete recycling chain, they simply raise the price of refrigerators to cover their “donation”. So now the customer pays more when they buy them, pays again to get rid of them, and there is no pressure on anyone in particular to make sure the system works (therefore it doesn’t).

Redesignation of household fridges as “hazardous waste” led directly to major retailers like Curry’s, Comet, John Lewis and Debenhams ending their previous promises to take back old fridges free when they deliver new ones.

Mistake #3 – driving collectors out of the recycling chain

Some councils collect the occasional refrigerator, but they will not move it from the kitchen to the road let alone down a flight of stairs. Some actually prosecute you for putting it outside instead of helping at all. The majority of home owners, tenants and landlords can’t lift or transport a fridge freezer, so for fridge disposal  they depend on appliance engineers, white van drivers or totters to remove them.

While there are often rules requiring waste sites to accept fridges and freezers from householders, they are allowed to levy hefty charges on “professionals” like hire drivers, engineers, builders or scrap merchants – and to refuse appliances from them completely if they feel like it. As a result, “professional” fridge disposal charges get passed back upon the householders that the government claims are entitled to free fridge disposal.

And the final cost can be more than the waste site’s surcharge. Often the professional is forced to travel tens of miles to find a waste site that will let them in. There is no legislation to oblige waste sites to accept waste.

In defence of waste site managers – they have their own disposal problems because they are not allowed to break-up refrigerators like other waste. Theoretically they are obliged to transport it to specialist recyclers who are few and far between.

With professional collectors almost eliminated from the recycling chain, householders are frequently left with no option but to dump, abandon or illegally dismantle refrigerators. Sadly this is happening because of the law and not in spite of it.

If controls on fridge disposal were drawn up with the purpose of preventing global warming that was their biggest mistake – because the numbers show it can’t. If MPs believed that when they voted for the current rules they were suffering from a King Canute syndrome – sitting on the throne ordering the tide to turn back.

According to the International Energy Agency, the global demand for refrigeration appliances and air conditioning systems is going through the roof. The energy consumed by refrigerated air conditioning alone is set to triple by 2050, by which time all the world’s air conditioners will be consuming electricity equal to the total energy capacity of Europe, the United States and Japan combined.

Without cooling systems, metal cars and glass high rises would be impossible in hot developing parts of the world like India, China and Brazil. As well as the electricity consumed the gases used inside cooling systems have a powerful global warming effect – thousands of times as powerful as carbon dioxide. At the same time, growing urban populations can no longer grow and eat fresh food, so are becoming dependent on refrigerated food supplies.

By comparison the UK’s contribution is miniscule, but the government has imposed restrictions on refrigerators here stricter than those that apply in big hot developing countries.

There are good reasons for forcing manufacturers to use safer materials, and then encouraging recycling. At Homesource we heartily support both. But the government has chosen to focus on “global warming” which legislation cannot prevent instead of on shoddy imports that leak gas – which it could. So as usual, the rich get richer, and the rest of us are told to pay for the mess.

Waste is the new narcotics

Waste crime is the “new narcotics” according to Sir James Bevan, the head of the Environment Agency (EA), “It feels to me like drugs felt in the 1980s: the system hadn’t quite woken up to the enormity of what was going on and was racing to catch up.” (https://www.theguardian.com/environment/2016/sep/22/ea-chief-waste-is-the-new-narcotics).

Illegal waste activity costs England £1bn a year and more than 1,000 illegal waste sites were discovered last year, more than in the previous two years combined, with 662 still active as of the end of March. The offences, sometimes involving organised crime gangs, ranged from illegal dumping of household and industrial waste to massive frauds involving recycling grants and landfill taxes. 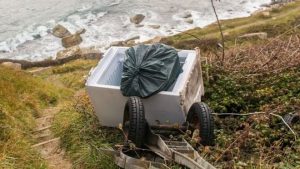 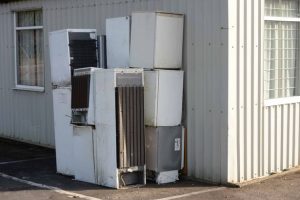 Fridges dumped behind a church in Coventry. Fridge disposal could bankrupt the church

Homesource 4U undertake environmentally responsible recycling of all used appliances.

We are currently running low on freezers, please call before ordering on 0115 8372373. Dismiss